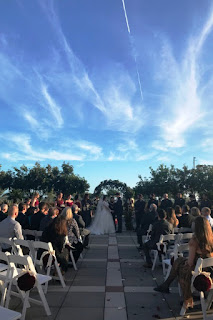 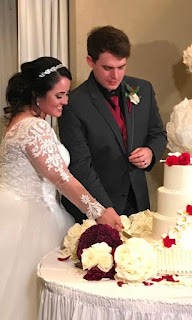 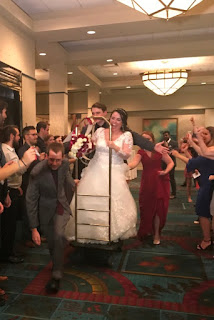 This fun-loving couple was great to work with – and so were all their guests!  Everyone was dancing and having fun all night long.  I think we had as much fun as they did!  To start, the ceremony was outside in the rooftop gardens.  To match their colors of crimson, cream, and charcoal, there were crimson floral kissing balls lining the aisle and a beautiful arch with floral accents.  The ceremony was unique, as the officiant told the story of how Carolyn and Brandon met and then spoke about special events leading up to the wedding date.  The newlyweds also had a ring warming, where their wedding rings were passed around for the guests’ blessings and good wishes.

After the cocktail hour, the reception followed in a ballroom.  The tables had floor-length cloths and the centerpieces had crimson floral kissing balls sitting on gold vases.  The cake had four, ivory stacked tiers, all accented by a swag of edible cream and crimson flowers running down the front.

As I mentioned, this was a fun crowd.  From the first song to the last, they were dancing and singing along.  At one point, there was a spontaneous conga line!  The fun continued to the end when everyone enjoyed the last dance before lining up in the hallway for the exit.  The good times for Carolyn and Brandon continued to the exit, when two members of the wedding party pulled and pushed them down the hallway on a luggage cart and off to their hotel room.  The guests were cracking up and loved it!  As the newlyweds rolled down the hallway, guests rang jingle bells, as a nod to the Christmas season.  It was a perfect wedding day.  Congratulations Brandon and Carolyn! 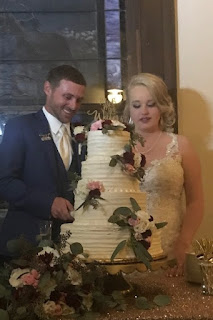 This pretty winter day brought us to one of our favorite venues.  With floor to ceiling stained glass windows and wood flooring, it’s perfect for weddings.  The ceremony was held outside The Lyceum in a beautiful gazebo.  The guests then moved inside for the reception.  The colors for this wedding were burgundy and steel blue, and they were tied together perfectly.  The wedding party wore dresses or suits in steel blue, and the gorgeous flowers were in shades of ivory, burgundy and pink. 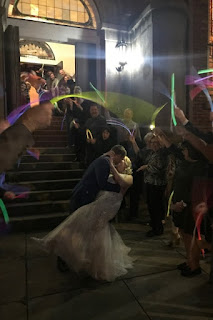 The guests entered the reception to find that it was also decorated in the wedding day colors.  The tables had floor-length burgundy table cloths with lace runners.  The centerpieces alternated between gold bird cages nestled in greenery and holding candles, and vases holding arrangements of ivory, burgundy and pink flowers.  The place settings were pretty with gold rimmed plates and gold flatware.  For a treat for the guests, there was a candy bar with assorted candies and bags to take them home.

The four-tiered white cake was so pretty!  All the layers had natural frosting lines and they were accented with ivory, burgundy and pink flowers.  The cake topper was the couple’s last name, nestled in flowers.  To give the room a candlelight glow, we had our amber uplights lining the walls.  And, our dance floor lighting helped add to the party feeling on the dance floor.   Later in the evening, the wedding came to a close with the last dance.  The couple made their exit as guests waved glow sticks.  Then, they got into their car and headed off to their new life.  Congratulations Cory and Shelley! 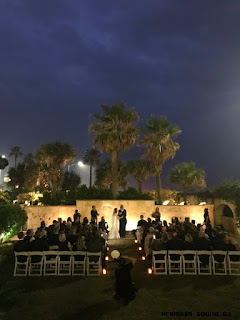 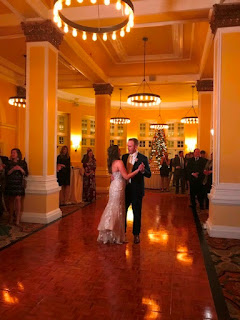 This evening wedding was as pretty as it was fun.  The ceremony was held outside, and by the time it ended, it was dark.  The water wall backdrop was beautiful, with lights shining up the wall.  The lanterns lining the aisle were the perfect touch. I never knew a night ceremony could be so gorgeous!  Instead of a large wedding party, Elizabeth had her brother as her Man of Honor and Brian had his sister as his Best Woman.

An indoor reception followed the ceremony.  The tables had floor length ivory cloths and were topped by centerpieces consisting of three tall vases holding candles, with greenery and roses around the base.  First, Elizabeth’s father got on the mic and welcomed the guests.  He was hilarious!   After dinner, we moved on to the toasts and cake cutting.  In lieu of a traditional cake, this couple had a tower of cupcakes with a small cake on the top for cutting.  The custom topper had Brian and Elizabeth’s initials on it.

When it came to dancing, this crowd was fun!  They were dancing all night long, and to all kinds of music.  They were singing, waving their arms in the air and jumping up and down.  There was a choreographed lip sync dance, a sing along to Bohemian Rhapsody, and a Thunderstruck drinking game.  You name it, they partied to it.  This group had so much fun they even had us go into overtime!  When the night came to a close, the newlyweds skipped a formal exit and instead, stayed in the ballroom to say farewell to their guests.  Congratulations Brian and Elizabeth! 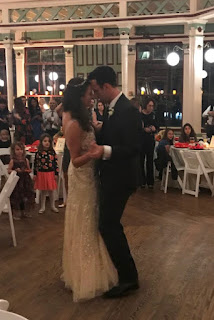 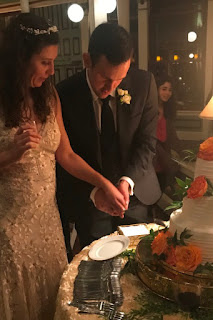 Although the rain forced this ceremony indoors, it was still beautiful.  The couple got married in front of the stage and the guests either sat in ceremony chairs or at their tables.   The aisle was lined with petals from fall colored roses.  The wedding had a fall color theme and it was mostly carried out in the flowers.  Mor’s bouquet was beautiful, full of fall colored roses and accented with greenery. The tables had floor-length ivory cloths topped by high/low centerpieces of fall colored flowers and surrounded by candles.  There were coral napkins with gold napkin rings sitting on gold chargers.  The tables were so pretty!

There was a candy bar that guests enjoyed, and they were in fall colors as well.  Mor’s three-tiered, stacked, red velvet cake had natural frosting lines and the tiers were accented with fall colored roses.  After dinner, ready for a night of fun, Mor changed into a short white dress and fuschia heels.  She kept on the floral crown that she wore during the ceremony.  The guest book at this wedding was unique, and I really liked it.  Instead of a signing their names in a book with pictures of the newlyweds, there was a picture of each guest with the bride and groom and the guests signed the book next to their picture.

The guests at this reception had so much fun on the dance floor!  They were singing along and having a blast.  They did the Hora while the newlyweds were lifted up in chairs as everyone danced around them.  A few times they broke into a soul train line.  I don’t think Mor and Eric ever stopped dancing!  When the night came to an end, the newlyweds walked to their car while their guests cheered.  It was a great night.  Congratulations Eric and Mor! 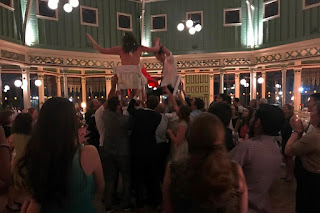