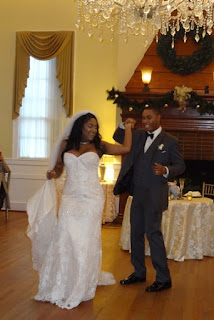 This Wedding Reception was not only fun, but so elegant!  The color for the day was periwinkle, and there were metallic accents, especially gold.  The tables had floor length tablecloths with periwinkle iridescent overlays and were surrounded by gold Chiavari chairs.  The tables were topped with gold chargers and beautiful high/low centerpieces.  The centerpieces were either low vases of blue hydrangea and pale pink flowers or tall candelabras with the same flowers.  Each centerpiece was also surrounded by more candles.  The wedding party matched the colors as well, as the ladies had beautiful long, periwinkle dresses and the guys wore grey tuxes with periwinkle ties. 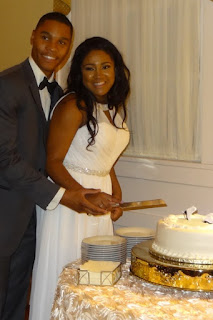 After the delicious dinner, we moved on to the toasts and cake cutting.  Torii’s cake had three white stacked tiers, all with elegant white accents.  The cake was topped with blue hydrangea and the couples’ bling initials.  Joey, who is a skater, had a red velvet cake decorated to look like a skating rink with little ice skates on top.  Then, to get the dance floor open, we started with the Anniversary Dance.  The longest married couple in the room had been married 61 years (!) and gave excellent, and sweet, advice to the Newlyweds.

One fun thing we did at this wedding was the Shoelywed Game.  That is when the couple sits in chairs back to back while I ask them a series of questions.  They then hold up a shoe, either hers or his, to indicate the answer.  Torii and Joey matched on most of the questions and the guests got a lot of laughs.

After a night of fun and dancing, the Newlyweds made their exit by running through lines of guests who were waving ribbon wands or blowing bubbles.  Congratulations Joey and Torii!

Had Fun with Rentech Nitrogen


This was our second year doing the Company Holiday Party for this group, and that’s always nice.  They had the ballroom decorated so pretty for Christmas.  The tables had white table cloths with red overlays and the chairs had white satin covers with red ties.  The high/low centerpieces alternated between tall vases with candles surrounded by greenery or low greenery arrangements with large Christmas balls in the center.  Everyone enjoyed the great buffet and desserts before they began gaming at the casino tables.  To add to the fun, we had our photo booth for the guests to enjoy.  There were door prizes given away as well, and that always makes for a great time!  It was another successful party for Rentech Nitrogen and we look forward to seeing them again next year.

Another Great Time with Flowtrend


This is the second year we’ve worked with Flowtrend for their annual Holiday Party, and they’re so much fun!  The company shows their appreciation for their employees not only by their great parties, but by giving away over 25 amazing door prizes, like a Kindle Fire, a Go Pro, Bluetooth speakers, and restaurant gift cards.  They always decorate the room beautifully as well.  This year the colors were black and gold and it was very elegant.  The tables had gold and black linens and gorgeous gold centerpieces with floating candles surrounded by lilies in gold vases.  To tie it all together, we had amber Uplights around the room.  It was beautiful!  For the three Grand Prizes, we played games where the guests competed to win.  It was hilarious watching them all vie for the Ultimate Grand Prize.  To top it off, they all had a great time in our photo booth.  This group is a lot of fun and it’s obvious how much they enjoy working, dancing, and playing together.  Thanks again Flowtrend, and we hope to see you again next year! 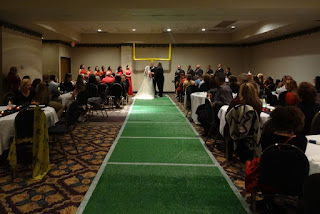 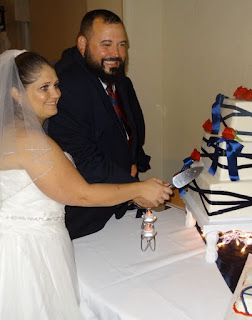 This Houston Texans themed wedding had so many details to tie it all together – it was amazing!  To start with, the Ceremony aisle runner was green Astroturf with white line markings to make it look like a football field, and there was a huge 10-foot tall goal post making up the altar.  At the gift table, there was an engagement portrait showing Mike and Crystal’s hands holding a Texan’s football.  The colors for this wedding were, of course, red and blue.  The Bridal Party wore red dresses and custom- made blue heels with the Texan’s logo on them.  The Groomsmen wore red vests with Texan’s tie tacks on their red ties.  They also wore custom shoes: white Nike’s with their names embroidered on them.  Even the Ring Bearer was tied in with the theme, as he carried a Texan’s football helmet with the rings tied to it.

The tables had white cloths with candles in the middle.  Surrounding them were votives with candles and red roses.  The white napkins had blue ribbons tied around them, to tie in with the theme as well.  Crystal’s three-tiered, square white cake matched the colors for the day, as it had blue ribbons crisscrossing the layers and red roses accenting the tiers and making up the topper.  Mike’s groom’s cakes were both football themed.  One was shaped like a football field and had a large edible football on top.  The other was shaped like a football helmet with the Texan’s logo on it.  Even the Newlywed’s toasting glasses were blue with the Texan’s logo on them.  To top all that off, the candy buffet was all in shades of red and blue and there were custom blue koozies with red writing on them.  I tell you, they really thought out every detail!

After a fun night of dancing and visiting with friends, the evening came to a close with the Last Dance.  After a sparkler exit, the football-loving Newlyweds said farewell to their guests and headed off to their new life as a married couple.  Congratulations Mike and Crystal! 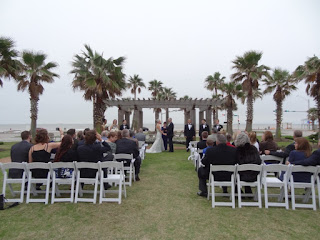 This Ceremony and Reception brought us to the Hotel Galvez, one of our favorite hotels.  And luckily, the rain held off for us to hold the Ceremony outdoors on the lawn overlooking the ocean.  That was perfect for a sea loving bride!  Also perfect was Marlies’ gown: it was a color called “sea mist”, a beautiful pale blue shade, and it was gorgeous.  Something unique about this Ceremony was that the Dan and Marlies walked down the aisle together. It was very sweet.  After the outdoor Ceremony, the indoor Reception followed. 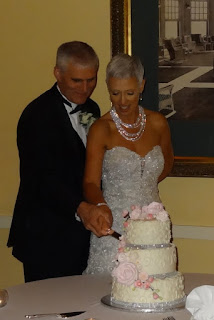 The colors for the day were white and gold and the only accents of color were the pink flowers on the cake and in the centerpieces.  Something we really liked was the table arrangements: the long rectangular guest tables were in a U shape, with guests sitting on both sides of the tables and Dan and Marlies sitting at the top of the U.  This arrangement, called a King’s Table, is great for a smaller wedding and better allows the guests to converse with each other.  The tables had white floor length linens topped with assorted vases of white and pink flowers running down the middle.

After a surf and turf dinner, we moved on to the cake cutting.  The elegant cake had three white stacked tiers, each with white detailing and a bling ribbon around the bottom.  The tiers were all accented with beautiful pink hand-made spun sugar flowers.  The pink flowers made up the topper as well.  The cake layers themselves were either vanilla or chocolate, so there was something to please everyone.

The Bouquet Toss at this wedding was a bit different as well, but it was something we had done before.  We invited all the ladies in the room to participate, whether single or married.  That got a lot of women on the dance floor and made the Bouquet Toss a lot of fun.  The favors were perfect for this beach front wedding, as they were votive candle holders filled with sand and tiny seashells.  When the night came to an end, everyone joined in the Last Dance before The Newlyweds ran through their guests and headed off to their new life as a married couple.  Congratulations Dan and Marlies!