I'm not a big Star Wars fan, but whether you are or not, you have got to check out this Star Wars themed wedding. It's incredible!
http://blog.patdyphotography.com/?p=1078

Now go check out this awesome wedding video. I can't believe they got everyone to participate, how fun!
http://offbeatbride.com/2009/05/lipdub-wedding-video#referrer
Posted by Wendy No comments: 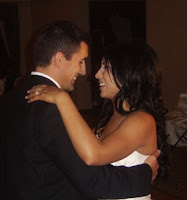 The first words that come to my mind are: what a gorgeous couple! They should be on the cover of a bridal magazine. Seriously. And, the fact that the Bride and Groom love the movie “Tommy Boy”, which is my favorite movie of all time, makes them even better. Then throw in two fun families that love to dance and have fun and you have a great reception!

This reception was held at the Hilton NASA Clear Lake. You know you’ll be in good hands there, especially with Margo, the Catering Director. She’s been there forever and the staff is excellent. The colors of the wedding were ivory and teal. The table cloths and chair covers were ivory, matching the tall ivory and white floral centerpieces. The bouquets were ivory and white as well, with teal ribbon accents. Other teal touches were on the favors, seating cards, and Bridesmaid’s dresses. It was very pretty and perfect for spring.

The Bride’s four tiered cake was stunning, with floral vine fondant accents, scrollwork designs, and a fondant ribbon on each tier. The Groom’s cake was so cool, and everything on it was edible. It was 3-D, with a little Leslie and Jessica sitting on logs around a campfire, with a tent behind them and two dogs lying on the ground beside the couple. I don’t know the meaning of the cake, but it was awesome!

We knew this was going to be another fabulous reception when the dance floor was packed from the very first song. It continued to be that way for the rest of the night! The first song was a fun nod to the movie “Tommy Boy” and was had meaning to Jessica and her dad. It was “What’d I Say” by Ray Charles, from the scene in the movie when Tommy and his dad were dancing at the wedding. Too funny! This group danced to everything, from Oldies to Country to Salsa to Merengue to Tejano to Pop to Hip Hop to Cumbia to you name it. The dance floor was rockin’ until the very last dance!

Finally it was time for the Bride and Groom to say goodnight to their guests and head out. Congratulations to Leslie and Jessica!
Posted by Wendy No comments: 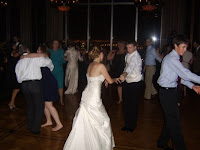 There’s nothing like a wedding reception with an amazing view, and this one had it. We were at the Petroleum Club downtown, which has windows on three sides of the ballroom. It’s so cool to look out over almost all of Houston! (Oh, and if you're considering the club for your wedding reception, know ahead of time that their coordinators Jeremi and Mai, as well as the staff, are all excellent.)

But, back to the wedding. The colors were black and gold; and the colors of the ballroom’s carpet and chairs matched perfectly. The tables featured floor length black tablecloths and were accented with alternating high/low centerpieces with simple white flowers and white candles. It made for a very elegant and classic feel.

Jennifer looked gorgeous in her slim, off white, strapless gown. For her headpiece, she wore a delicate, thin headband with tiny white flowers. I loved the bridesmaid’s gowns! They were made of a beautiful gold/champagne color, and the strapless bodice featured a black lace overlay with gold sash. The guys wore black tuxes with vests to match the ladies dresses. It all tied together beautifully.

The newlyweds came in and immediately went in to their First Dance. After a welcome to the guests by the Father of the Bride, and a blessing by the Father of the Groom, dinner began. Then, after the toasts and the cake cutting, it was time for ice cream! Derrick and Jennifer cut only a small mini cake for pictures, and had Marble Slab serve ice cream to the guests. The guests got to choose the flavor of ice cream and toppings they wanted. That was a huge hit!

This was another wedding with a lot of dancers. From the first song to the last, the dance floor was packed. And the Petroleum Club has a really big dance floor. You should have seen them jumping up and down and singing along to “Shout”. What a blast! This crowd danced to everything, from Pop to Oldies to Hip Hop to Disco to Country to Rat Pack.

When it was time for the bouquet and garter, we couldn’t believe how many single ladies and men were in the crowd. Usually you see 5-10 people out there for the bouquet or garter toss, but last night there must have been at least 20 for each.

Finally, after tons of fun, dancing (and I mean nonstop dancing!!), and ice cream, it was time for the Newlyweds to leave. They ran through a shower of rose petals and off to their new life together. Congratulations and have fun on your Caribbean cruise!
Posted by Wendy No comments:

We performed at a Prom last night, and we had a great time! The students attend a small Christian school that doesn’t sponsor a Prom. So, the seniors put together a committee, sold tickets, and held their own Prom (sophomores and juniors were invited as well). To top it off, they did a fantastic job. The theme was Gala Among The Stars, so there were stars on the wall and the tables, with blue tablecloths and chair ties to match.

Once it was dark outside, the house lights were turned off, our full lighting package threw some awesome lights on the dance floor, and the party began! (That’s the beauty of a lighting package: it really lets you create a dance environment that encourages the crowd, even the shy ones, to get out on the floor.) The music, while mostly current Pop/Hip Hop, also featured a variety of other genres. There were some awesome dancers in the crowd!

As our small gift to the graduating seniors, we provided a complimentary Gobo light, which projected the words “Prom 2009” on the wall directly behind where the Prom King and Queen were crowned.

There was some fun and wild dancing that night! They were all going crazy for “YMCA” and doing a soul train to it, it was hilarious watching them do the “Apache” dance, and they were all out there for the Cha Cha Slide. From slow songs to fast, there were people dancing almost all night long. It was so great to see so many of the guys out there dancing as well. It really was a fun time and we enjoyed working with these students. They truly were a great bunch.

Finally the night had to end, so the senior class song was played, and the partygoers headed out. Congratulations again to all of the graduating seniors of 2009! Go Eagles!
Posted by Wendy No comments:

Last night we did a Sweet 16 for a beautiful girl named Victoria. It was kind of a combination of a Quinceanera and a Sweet 16. Victoria entered in a gorgeous gown behind mariachis, who serenaded the crowd at Bay Oaks Country Club throughout dinner. Following dinner, the guests enjoyed a slide show, followed by a toast and cake cutting. After Victoria shared a sweet dance with her father, the party started! (Soon to be followed by a build it yourself ice cream sundae bar, which was a big hit.)

One thing to mention about Victoria’s is that she is a very impressive young woman! She apparently has major (and I mean major!) accomplishments in the field of Taekwondo. I have a feeling we’ll be seeing her in the Olympics pretty soon.

This group was a lot of fun. There were people of all ages, and they all had fun on the dance floor to everything from Hip hop to Reggaeton to Salsa to Merengue to you name it! Some of the guys were awesome dancers. They were amazing on the dance floor and a crowd gathered around them whenever they got going! At one point some of the younger kids in attendance joined in and it seemed like there was a dance off going out there! Oh, and I can’t forget the Conga line around the room or the guy spinning on the dance floor.

After fun dancing all night long, Victoria and her court left in a stretch Navigator, probably off to more music and fun. Congratulations and Happy Birthday Victoria!
Posted by Wendy No comments: