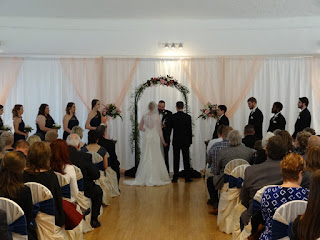 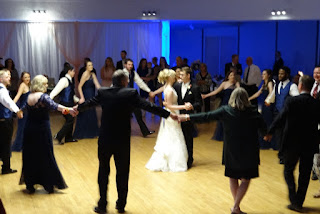 This cold winter’s day Ceremony and Reception brought us to a venue where we haven’t played in a long time, and it was nice seeing it again after renovations.  The Ceremony was held inside on the huge dance floor and after the room flip, the Reception followed.  The color for this wedding was navy, but there were accents of light pink and gold.  The tables had floor-length ivory crinkle satin cloths with navy napkins and were surrounded by chairs with ivory crinkle covers with navy ties.  There were three different styles of high/low centerpieces: tall vases with arrangements of pink and ivory flowers,  To tie everything together, there were blue Uplights accenting the room.  Hayley’s ivory four-tiered cake matched the colors of the day, as it had gold accents on it and pink flowers cascading down one side.  Stuart’s chocolate cake matched his interests, as it had a violin on the top.

One fun thing we did at this wedding was the Grand March.  If you don’t know what it is, it’s a Czech tradition where two lines of people march around the room intersecting and making tunnels and circles.  Eventually, it ends up with the Bride and Groom on the dance floor in the middle of a big circle.  They then do their first slow dance together.  This Grand March had almost everyone in the room involved and it lasted ten minutes!  We later did the Anniversary Dance, and the longest married couple had been married 51 years.  We asked them to give advice to the Newlyweds and the husband said, “Do whatever she says” (smart man - haha) and the wife said, “Don’t kill each other.”  They got quite a laugh!  The Bouquet and Garter came later and then everyone danced until the end.

When the night came to a close, Haley and Stuart enjoyed the Last Dance before running through a shower of bubbles and heading off to their new life as husband and wife.  Congratulations Stuart and Hayley!

short floral arrangements in the same colors, or a trio of vases with floating candles.
Posted by Wendy No comments: 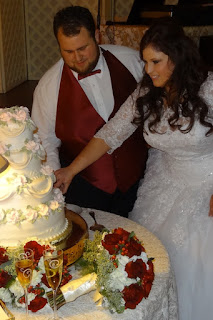 This reception was so beautiful!  And, as much as it was beautiful, it was fun!  The color for this wedding was berry, with accents of champagne and gold.  The tables were gorgeous; as they had floor-length ivory linens with berry crinkle taffeta toppers.  The alternating high/low centerpieces were either tall vases of ivory hydrangea and berry roses, or low vases of the same flowers.  Each place setting had a gold charger with an ivory napkin with a gold napkin ring.  The tables were surrounded by gold chiavari chairs with ivory seats.  To tie it all together, we had amber Uplights accenting the stage and the room.  It was all very elegant.

Barbara’s chocolate cake matched the elegance of the room with its four stacked ivory tiers.  The tiers were accented with ivory fondant draping and pale pink flowers.  Austin’s cake was so cute: it had three stacked tiers decorated to look like a tree trunk and the couple’s initials were ‘carved’ into the middle tier.  There were edible fondant leaves accenting the tiers.

One thing I must mention is Barbara’s amazing wedding gown.  It had a huge ball gown skirt with a long train and the top had beautiful ¾ length lace sleeves.  She was so gorgeous!  After a night of fun and dancing, the evening came to a close when the Newlyweds bid farewell to their guests and headed off to their new life as a married couple.  Congratulations Austin and Barbara!