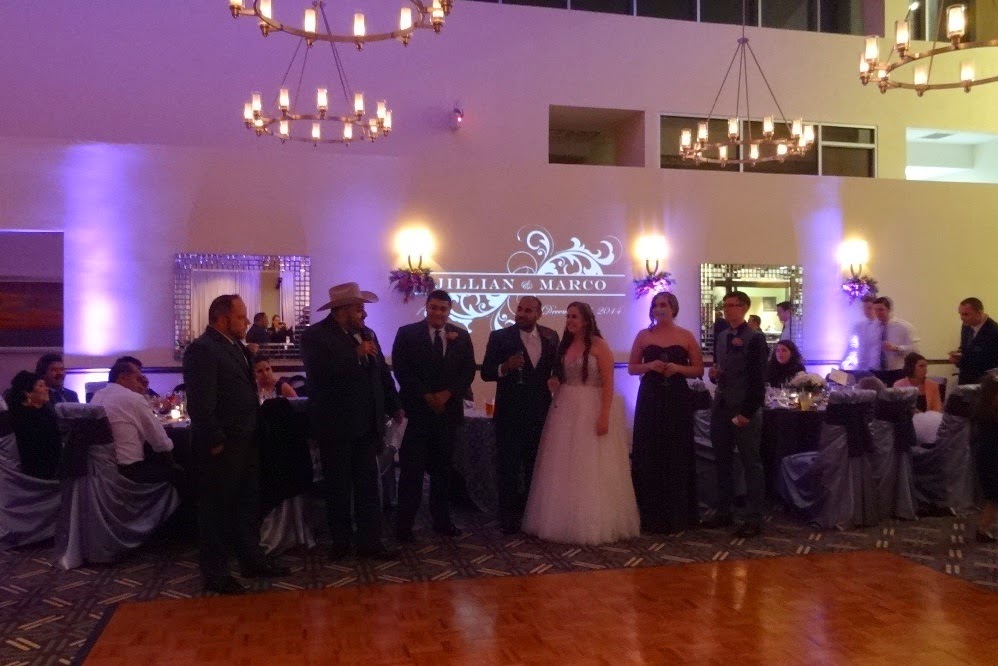 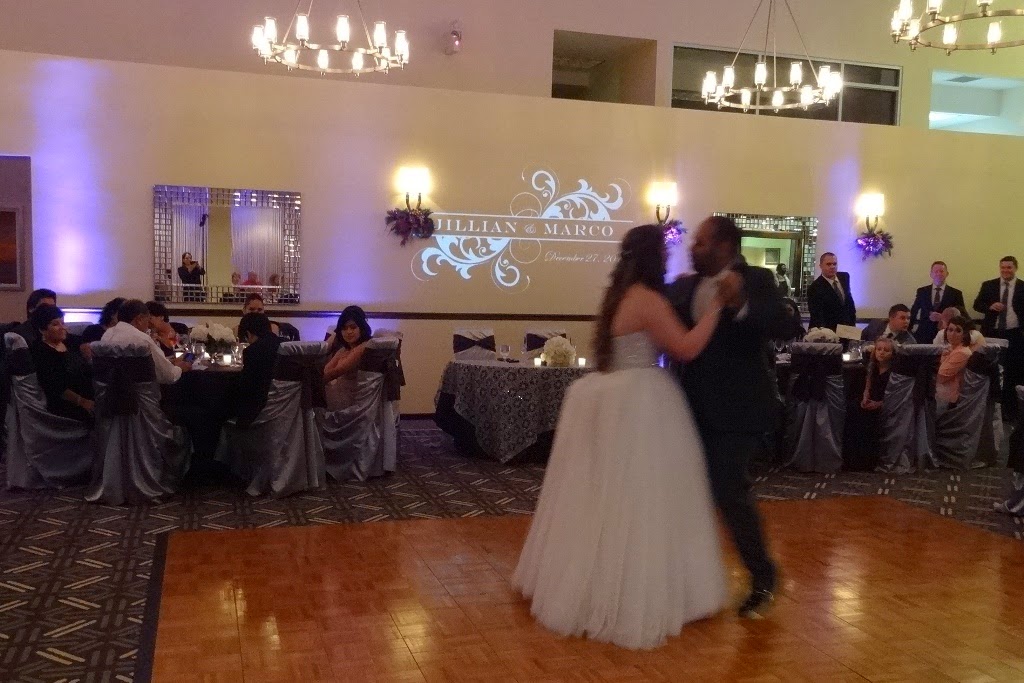 This was an extra special wedding for us, as we had DJ’d Jillian’s sister’s wedding five months ago.  It’s always nice to see a past bride and groom and their family again.  There was a unique aspect to the wedding itself, as Marco and Jillian did a balloon ceremony instead of a unity candle or sand ceremony.  They started with two individual balloons and during the ceremony they tied them together.  When they made their exit at the end of the night, they released the balloons.

There were a few other unique details at this wedding as well.  They had a   They had a large initial for the guests to sign instead of a guestbook.  And for favors, they had a custom decorated cookie at each place setting.
cookie and cocoa bar for the guests to enjoy hot cocoa and take home a bag of cookies.

The colors for this day were plum and charcoal and they were carried out beautifully.  The tables had floor length plum tablecloths with alternating candle and floral centerpieces.  The chairs had grey satin covers with plum ties.  To tie in with the colors, we had purple Uplights highlighting the room.  We also had a GOBO monogram of the couple’s names and wedding date projected on the wall behind their sweetheart table.

After the entrance, the special dances and dinner, we moved on to the toasts and cake cutting.  Jillian’s cake had three white stacked tiers with a plum colored band around the middle tier.  Marco’s cake was shaped exactly like an Xbox – it was cool!  We then started the dancing with the Anniversary Dance.  The longest married couple in the room had been married 43 years and their words of advice were “give in” to the other person.  LOL   The dancing continued until we stopped for the Bouquet and Garter.  Then it was back to the dancing until the Last Dance.  Jillian and Marco enjoyed the Last Dance before they ran through two lines of sparklers, released their balloons and headed off to their new life together.  Congratulations Marco and Jillian!


This holiday party showed how much the company truly appreciates their workers.  They had a great party complete with us playing the music and our photo booth, a roving photographer who also took posed shots of the couples, casino tables, an open bar, a delicious buffet, and plenty of door prizes.  For the grand prize, they gave away a large LCD flat screen TV!  It’s so nice to see a company give back to their employees, especially during these economic times.  It's also great to see all the employees having fun together.  Thanks Rentech Nitrogen!
Posted by Wendy No comments:

"Stick to one basic flavor for the bride's cake and if you have a groom's cake you can do something a little more unique or taste specific.  By choosing a traditional white cake or maybe a yellow or spice the majority of guests will enjoy it.  Punch it up with a yummy fruit filling and you are good to go!  Use your groom's cake to be the cake with the more taste specific flavors, like a black forest or red velvet cake.  There aren't as many servings, so you aren't wasting cake that goes uneaten.  Plus, guests still have the more basic bride's cake to choose from as well.

But what about having each tier a different flavor?  Well, a bride can certainly do that, but I personally don't recommend it.  When the cake is cut they begin at the top and serve the entire top tier.  Then, we move onto the second tier and serve that and so forth.  Therefore, your guests will not actually get to choose what flavor they want.  They are served whatever tier is being cut at the time they are in line.  Not to mention, the top tiers will only serve a few people, so just a handful of people will get certain flavors while others are left to the larger tiers.  When guests see another guest walking around with a different flavor sometimes it causes guests to go back for seconds to sample that new flavor, and there is a possibility that you can run out of cake.  Or, what if that flavor is gone?  So disappointing.

All that to say, I personally recommend only serving one flavor per cake to keep things simple and your guests happy.  Too many flavors can cause confusion and chaos at the cake table."
Posted by Wendy No comments: 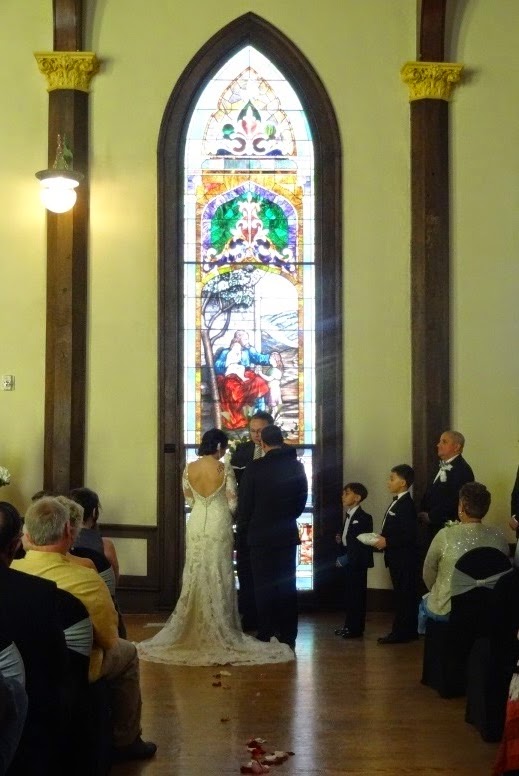 This wedding of this fun-loving couple featured the colors of black and silver, which were reflected in the decor.  The tables had floor length black satin tablecloths, black chargers and grey satin napkins with bling napkin rings.  The chairs had black satin covers and silver sashes with bling accents.  To tie in with the colors, the bridal party wore long black dresses and the groomsmen were in black tuxes.

The Ceremony was beautiful: it was held right in front of the Lyceum’s gorgeous stained glass windows.  Following the Ceremony, we began the Reception.  The white wedding cake matched the wedding day colors, as it had black bands around the bottom of each tier and black bows on the front.  The silver topper said Mr. & Mrs. and had bling accents.  When it came time to dance, this crowd was on the dance floor from the first dance to the last.  Following the Last Dance, the Newlyweds made their exit and headed off to their new life as a married couple.  Congratulations Mike and Candace! 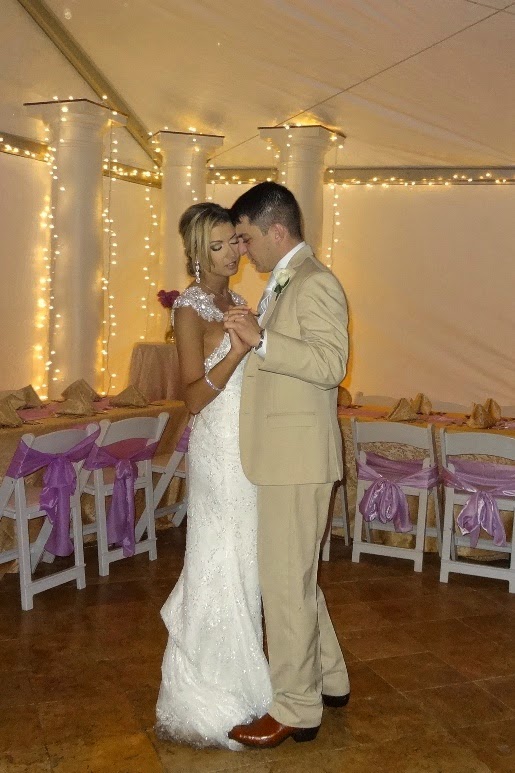 The rainy weather didn’t stop this very in love couple from enjoying their outdoor Wedding Ceremony and Reception: they brought in tents, danced the night away and had a blast!  The color for this wedding was lavender, which was reflected in the linens and flowers.  The table had floor length champagne cloths with lavender runners and the white garden chairs had lavender chair ties.  The centerpieces consisted of white and lavender flowers with candles surrounding them.  The dresses of the bridal party and the ties of the groomsmen were the perfect shade of lavender to tie it all together.  For the final elegant touch, we had a GOBO monogram of the couple’s names and wedding date projected onto a tent wall. 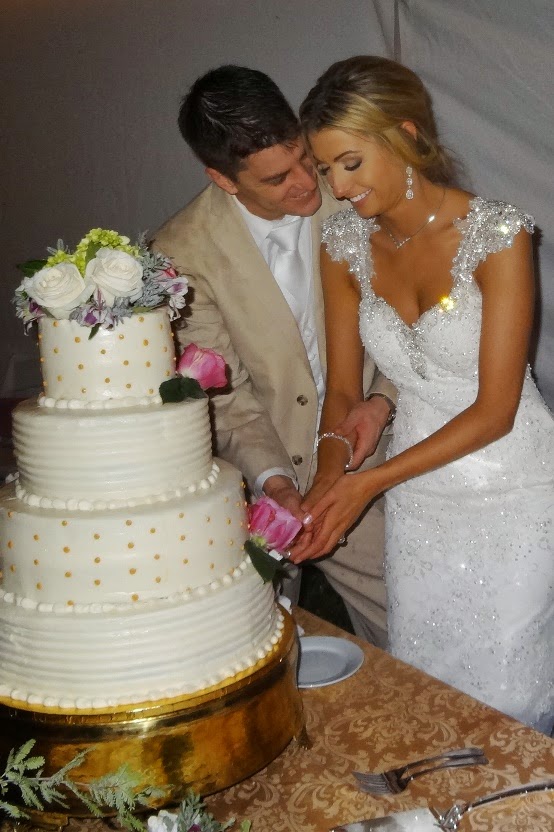 After the introductions, Seth and Natasha enjoyed their First Dance before they danced with their parents.  A delicious dinner followed before we moved on to the toast and cake cutting.  Natasha’s four tiered white cake featured a champagne colored dot design on alternating layers and lavender roses accenting the tiers.  The topper was made up of beautiful white and lavender flowers.  Seth’s chocolate cake was in the shape of Texas and had the Marine Corp logo and his college fraternity logo on the top.

The dancing came next and when it came time to dance, this group didn’t let the weather slow them down: they had fun on the dance floor from the first song to the last.  But finally the night came to a close and the Newlyweds ran under an arch of sparklers before heading off as a newly married couple.  Congratulations Seth and Natasha!
Vendors:
Venue: Lasker Inn
Cake: Cakes by Jula
Photography: Krystal Malloy
Videography: SMJ Productions 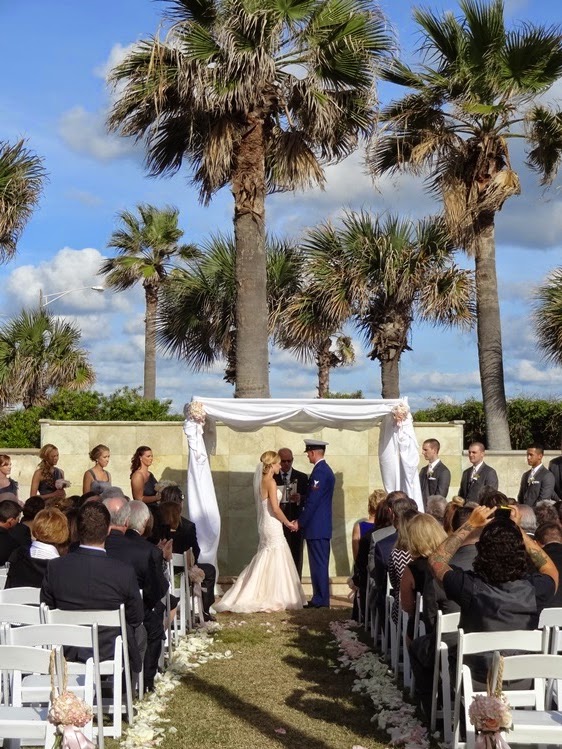 What a gorgeous day for a wedding!  The outdoor Ceremony was followed by the indoor Reception, both with accents of blush pink and peach to match the colors of the day.  The outdoor Huppah was white satin with beautiful floral arrangements at the corners, and matching flowers with starfish accented the aisle.  Inside, the tables had floor length white cloths with pink/peach lace runners.  The centerpieces consisted of bronze vases filled with pink and peach flowers.  Starfish leaned against the centerpieces holding up cards with the table numbers.  When the guests arrived, they found starfish nestled in sand tied to their favor cards.  For another cute beach accent, instead of signing a guestbook, the guests signed a wood anchor with the couples’ last initial on it.  That initial matched the one on their cupcakes wedding cake. 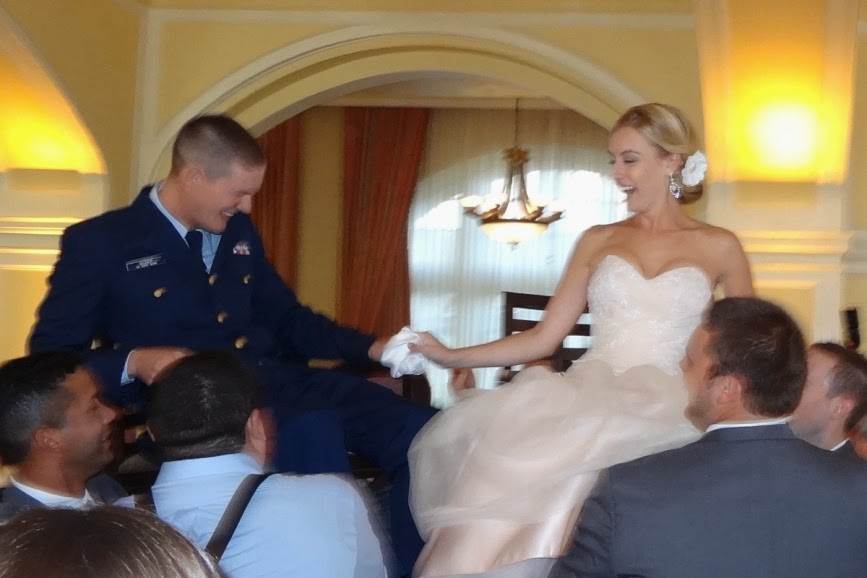 One thing we have to mention was Rachel’s gorgeous dress, it was a pale blush pink color that not only complemented the colors of the day but was absolutely beautiful on her.  After a wonderful wedding day with lots of fun and dancing (From the Hora to Shout to everything in between, this crowd loved to dance!  At one point, almost everyone in the room was on the dance floor singing along to The Piano Man.) the wedding reception came to a close.  Everyone shared in the Last Dance before the Newlyweds wished them all farewell.  Congratulations Scott and Rachel!