The country club reception was so pretty and a perfect way to usher in spring. The colors were platinum and yellow, and I loved it! The tables had floor-length platinum satin table cloths, and the chairs had platinum satin covers with yellow sashes. Now here’s the cool part: apparently, both of the Newlyweds are chemists. So they incorporated a ‘chemistry’ theme into their wedding in some awesome ways! The centerpieces consisted of three ‘vases’, all shaped like large beakers or something you would find in a lab. One had a yellow rose, one had yellow rocks in the bottom, and the other had a yellow floating candle. To top it off, each table was named after an element on the periodic table. The favors consisted of yellow candies in personalized test tubes that said “Bonded for life.” How cute!

Ellen was so gorgeous in her slightly off white, strapless gown. It had an asymmetrical wrapped waist, and an A-line skirt. Her bridesmaids wore the prettiest yellow knee-length dresses with white sashes. The dresses had beautiful, white embroidered flowers on the skirt. They all carried bouquets of yellow flowers. Brian and his Groomsmen looked great in their grey suits. He wore a white tie while the guys wore yellow ties.

After a fun introduction of the Wedding Party and the special dances, it was time for dinner. The toasts followed dinner, and we had one we haven’t seen before: the Best Man reading his toast off his iPod. Then, we were on to the cake cutting. The cake was amazing: it had three, white, stacked tiers. The top and bottom tiers had yellow fondant bands around the bottom of each, with fondant ‘squares’ that were made to look like elements on the periodic table. The middle layer had a made-up element with their last initial and name, representing the new element they make together. It was so cool! After the cake cutting, it was party time!

Since this couple chose not to do the Bouquet or Garter, it was nonstop dancing until the end. This crowd danced to everything from slow to polka, but they really loved the current pop/hip hop hits. And they were hilarious! There was constant dancing, people trying to out-dance each other, jumping up and down, crazy dancing, singing along, you name it. Ellen and Brian had a blast, so did their friends and so did we. We had so much fun just watching!

After a long night of dancing, the evening came to a close. Brian and Ellen stayed until the end to say farewell to their guests after their Last Dance. Congratulations to these very much in love and very fun Newlyweds, and enjoy Wyoming!

This congratulations goes out to personal family friends. For the first time in quite a few years, instead of working at a wedding, we got to be guests. We loved it! Strolling in through the front doors instead of rolling in through the loading dock, being asked if we'd like hand-passed hors d'oeuvres, watching the toasts without making sure the toast-er was holding the mic close enough to his/her mouth, dancing with friends, chatting with the people at our table, such FUN!

Jennifer and Julian had a 'love voyage' theme, since they love to travel. Everything from their invites to menu cards to decor to favors to cake design matched, and it all was pulled together beautifully. We had such a great time celebrating their wedding with them, their family, and friends.

Congratulations Julian and Jennifer, and enjoy Malaysia and The Philippines.
Posted by Wendy No comments: 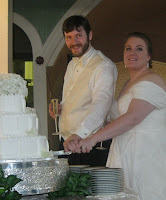 Such a pretty day for an afternoon wedding! This reception took place at the historic Garten Verein in Galveston. They recently painted the building and it looks great! The colors for this wedding were navy and ivory. The tables had ivory floor-length linens, with navy pintuck overlays. The centerpieces consisted of ivory/off white hydrangea with curly willow in tall vases, with candles around the bottom. Each place setting had a silver charger and ivory napkins. The whole room was very elegant. As a surprise, a bagpiper played as the guests arrived, and led the Bride and Groom into the room as we introduced them. It was really cool! Another unique touch to this reception was the favors. They were personalized bottles of Jalapeno Hot Sauce.

Shannon looked perfect in her ivory satin gown. It had short, off the shoulder ruched sleeves, which matched the ruching on the bodice. It was very elegant. She had her hair in an updo with a beautifully embellished hair brooch above it. Her Maid of Honor wore a blue dress with one ruched shoulder and a ruched bodice. They both carried full bouquets of ivory flowers. Lance was handsome in his black tux with ivory shirt and vest. He wore a white boutonniere as did his best man.

After dinner and the special dances, we opened the dance floor. This crowd loved to dance, which you don’t always see when it’s still light outside, but they were on the dance floor from the very first song. They liked oldies, 80’s, pop, line dances, you name it. After a bit of dancing it was time for the toast and cake cutting. This was the first time we saw the Best Man toast with a flask. It cracked everyone up. The Bride’s carrot cake (yum!) had three, white, stacked tiers, each with white ‘stripe’ designs going down the sides. There were a few hydrangeas on each layer and more on top for the cake topper. The Groom’s purple and orange Clemson cake had a paw print on top.

Following the bouquet and garter tosses and more dancing, the reception came to an end. Shannon and Lance bid farewell to their guests and headed off to their new life together. Congratulations Lance and Shannon and enjoy Ireland!