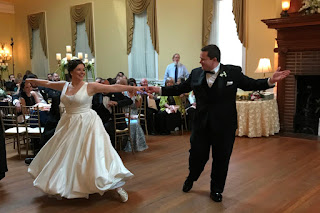 This was another reception that proved you can have tons of dancing and fun in the daytime.  But first, let’s get into the details.  The colors of the day were navy, pink/blush and gold.  The tables had navy floor-length satin linens and were topped by gold chargers.  The high/low centerpieces were either tall gold candelabras with hydrangeas or low vases with hydrangeas and greenery.  The bridal party matched the colors with their short, navy dresses, and the groomsmen looked handsome in their grey suits with navy bow ties. 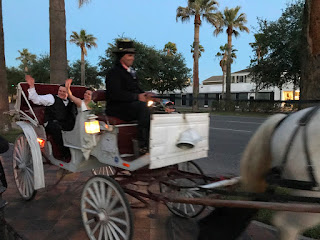 Lindsey’s white, stacked cake was so beautiful!   It had roses in shades of white and pink flowing down the front.  The topper was a sweet little Precious Moments bride and groom.  Phillip’s groom’s cake had a surprise: when the couple went to cut it, he found that it was covered in candles.  We played Happy Birthday as everyone sang along!  Obviously, the wedding day was Phillip’s birthday. As a nod to his love of Star Wars, his cake also had a BB-8 cake topper.  For the guest’s sweet tooth, there was a candy buffet with all kinds of delicious chocolate.

When the guests entered the reception, they were greeted with a custom sign welcoming them.  The sign-in book was a photo book of the couple’s engagement photos, and guests signed around them.  To give the kids something fun to do, there were coloring books and crayons as well.  We saw something we’ve never seen before, and I loved it.  It was a six foot wood ladder painted white, holding white wood shelves.  Each shelf held pictures, framed sayings and flowers.  For one more special touch, the couple had a paper flower wall for guests to use as a selfie-station.  It was so pretty!

Lindsey and Phillip’s first dance was amazing!  They did an incredible waltz, one of the best first dances we’ve ever seen!  Phillip even asked for another waltz later, so they guests got to see them dance again.  They were great!  As I said earlier, you can have plenty of fun dancing at a daytime reception, and this wedding showed it.  There was dancing from the first song to the last, and we had a great time watching it.  Once the last dance was over, the guests headed outside to shower the newlyweds with bubbles as they made their exit.  The couple then got into a horse-drawn carriage and headed off to their new life together.  Congratulations Phillip and Lindsey!

Congratulations Will and Linde 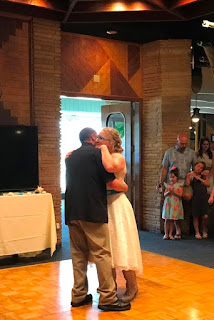 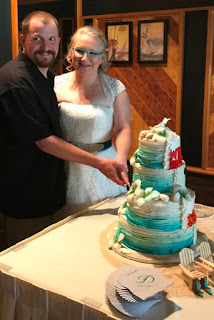 This reception brought us to a venue where we’ve never worked, and that’s always fun for us.  Near the water and overlooking a pool, it was perfect for a beach-themed event.  Every detail tied in perfectly with the wedding color of Malibu (turquoise) as well.  The tables had ivory table cloths and were topped by burlap runners and burlap squares.  The centerpieces were fish bowls filled with seashells and there were seashells and sola flowers scattered around the centerpieces.  At each place setting was a custom glass coaster, with sea shells and Linde’s and Will’s names on it.

In lieu of a traditional guest book, there was a canvas of a tree, and guests signed their names on the leaves.  There was also a personalized Wedding Wishes box.  Guests wrote good wishes to the Newlyweds on cards that they dropped in the box.  This wedding had something I’ve heard about but have never seen in person: sola flowers.  Sola flowers are made of wood, so they last forever.  The bouquets, boutonnieres and corsages were all made of ivory, beige and Malibu colored sola flowers and they were beautiful!

To match the beach theme, the wedding day was casual.  Will wore khakis and a black short-sleeved shirt and Linde wore a beautiful tea-length lace dress.  The dress had a Malibu colored sash, and she wore cowboy boots.  The bridesmaids wore Malibu colored dresses with cowboy boots also.  The guests were encouraged to dress casual for the wedding, so they wore shorts, sandals, Hawaiian shirts and the like.  It all blended together perfectly.

You know how everyone says there won’t be dancing at an afternoon wedding?  Well, this reception showed that that saying is wrong!  The dance floor was full from the first song to the last!  Oldies, Disco, Country, Pop, you name it: they danced to it and had a blast!

The two-sided, four-tiered wedding cake was awesome. One side was decorated in shades of white and blue, to look like the ocean.  There was brown sugar at the bottom of the cake to look like sand.  In front of that side were two little beach chairs with boots in front of each: cowboy boots for Linde and military boots for Will.  The other side of the cake was decorated with flames and a fire fighter symbol.  Linde and Will are both fire fighters, how awesome is that?  Also on this side was the newlywed’s couple name: Wende.  Short for Will and Linde.  Too funny!

After a great afternoon of good food, good cake, good friends and great dancing, the afternoon came to a close with the last dance.  The couple then ran through a shower of bubbles before saying farewell to their guests.  Congratulations Will and Linde!