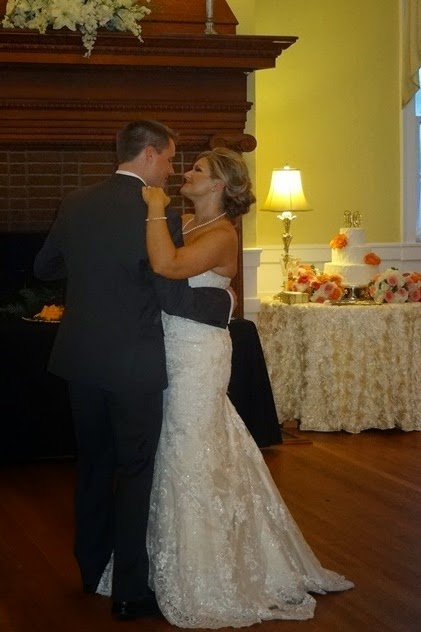 What a gorgeous Reception!  With the colors of coral, mint and gold, the room was beautiful and perfectly complemented the historic venue.  The tables had floor length ivory linens topped with ribbon-embroidered taupe toppers and gold chargers.  The tables were surrounded by gold Chiavari chairs.  The floral centerpieces alternated between low vases with ivory and coral flowers and tall vases filled with green apples and limes topped with dramatic coral and ivory floral arrangements. To tie in the gold and add a beautiful glow to the ballroom, we had Amber Uplights lining the accent wall. 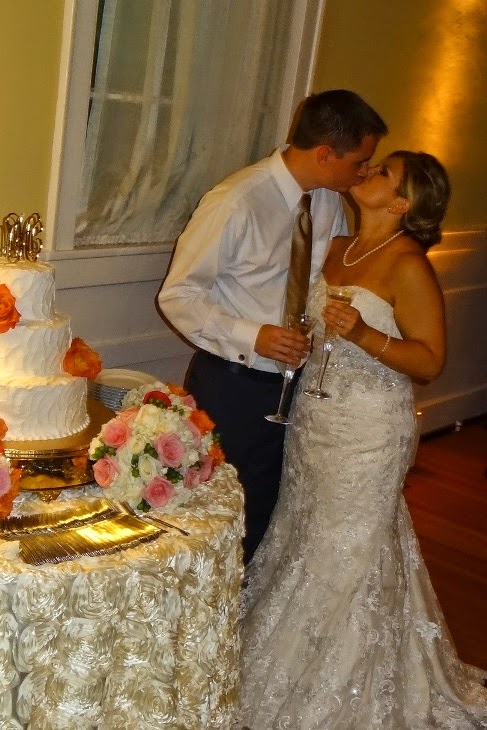 After dinner, we had the toasts and cake cutting.  Melodie’s lemon cake with raspberry filling was made up of three stacked tiers with the natural style of frosting.  Coral roses accented each tier and the couple’s monogram in gold made up the topper.  Chad’s chocolate cake was in the shape of Texas with a Texas flag draped across the top and the whole thing was surrounded by chocolate covered strawberries.  The Father/Daughter dance came next and then the dance floor opened to all.

When not dancing, the guests enjoyed the candy buffet as well as the drinks wrapped in custom cozies.  Later we stopped for the Bouquet and Garter and then went back to dancing until the end.  The Newlyweds enjoyed the Last Dance before running through a shower of bubbles and driving off in a limousine.  Congratulations Chad and Melodie!

Had Fun at a Care Center


We had a great time at this Care Center with the staff, residents and guests at a party and open house to the public.  We played Doo-wop music combined with other oldies, but received a few requests for ABBA and Michael Jackson as well.  The residents loved the music and were so nice!  One woman told us how she got grounded as a teenager for doing The Twist and how she wasn’t allowed to watch Elvis Presley.  Another showed me all his music on his phone and we talked about all the great songs from the 30’s to current.  Another man told us how he used to know Ernest Tubbs.  There was some dancing, even in the wheelchairs!  What a great group of care givers residents: we hope you had as much fun as we did!
Posted by Wendy No comments: 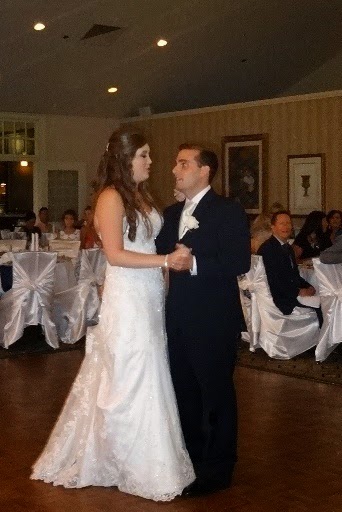 This Wedding Reception featured the colors of navy and coral and was so pretty!  The tables had white tablecloths with navy runners.  The alternating centerpieces were either vases of coral and white flowers or lanterns with candles.  The chairs had white satin covers.  To tie in the wedding day colors, we had Coral Uplights accenting the main wall.  It was beautiful!

After the Introduction and First Dance, we moved on to dinner, followed by the toasts and cake cutting.  Jordan’s three-tiered white cake had white accents on each tier and edible coral and blue flowers.  The couple’s initial adorned the cake top.  Jake’s ‘cake’ was assorted cake balls, which everyone loved as well.  The Father/Daughter and Mother/Son dances came next and then we opened the dance floor with the Anniversary Dance.  The longest married couple at this wedding had been married 42 years and gave sweet and funny advice to Jordan and Jake.  Then, it was party time! 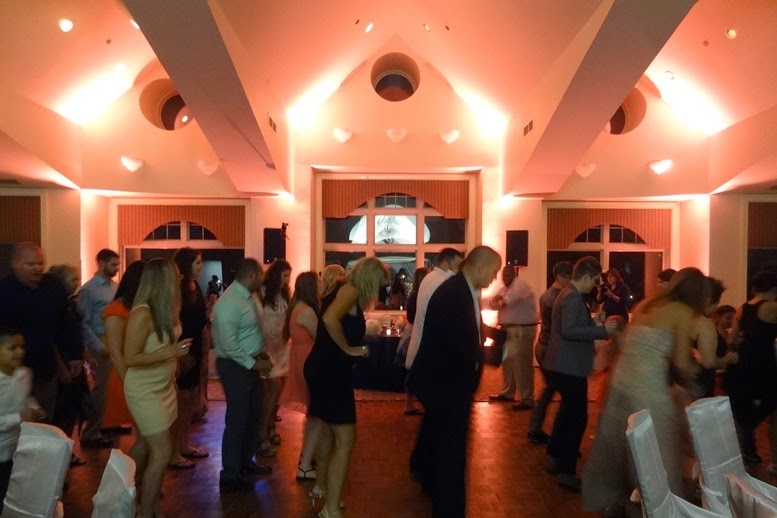 After a bit we stopped for the Dollar Dance, and later for the Bouquet and Garter, but the dancing for this group continued until the end.  When not dancing, the guests enjoyed the candy buffet with all kinds of candy in shades of blue.  They also had a great time in the photo booth.  When the night came to a close, everyone shared the Last Dance before the happy couple made their exit through sparklers and took off in a limo.  Congratulations Jake and Jordan! 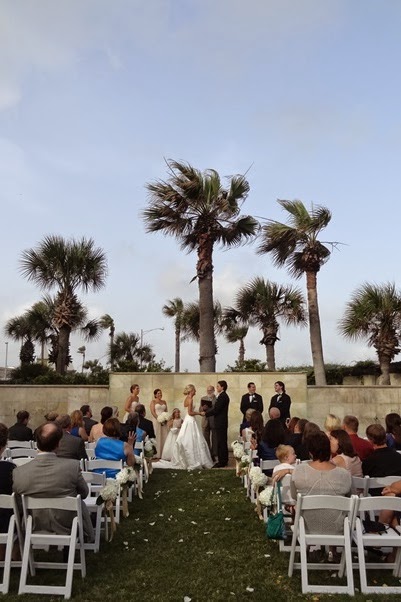 What a wonderful wedding day for a sweet couple!  With the wedding colors of champagne and ivory, this wedding was elegant yet still fun.  The outside Ceremony was held in front of a water wall and the white garden chairs were accented with white hydrangeas and champagne colored ribbons.  In the ballroom, the tables had ivory floor length cloths and were surrounded by Chiavari chairs.  The centerpieces were tall vases filled with hydrangea, roses, gardenias and other white flowers.  The room was beautiful. 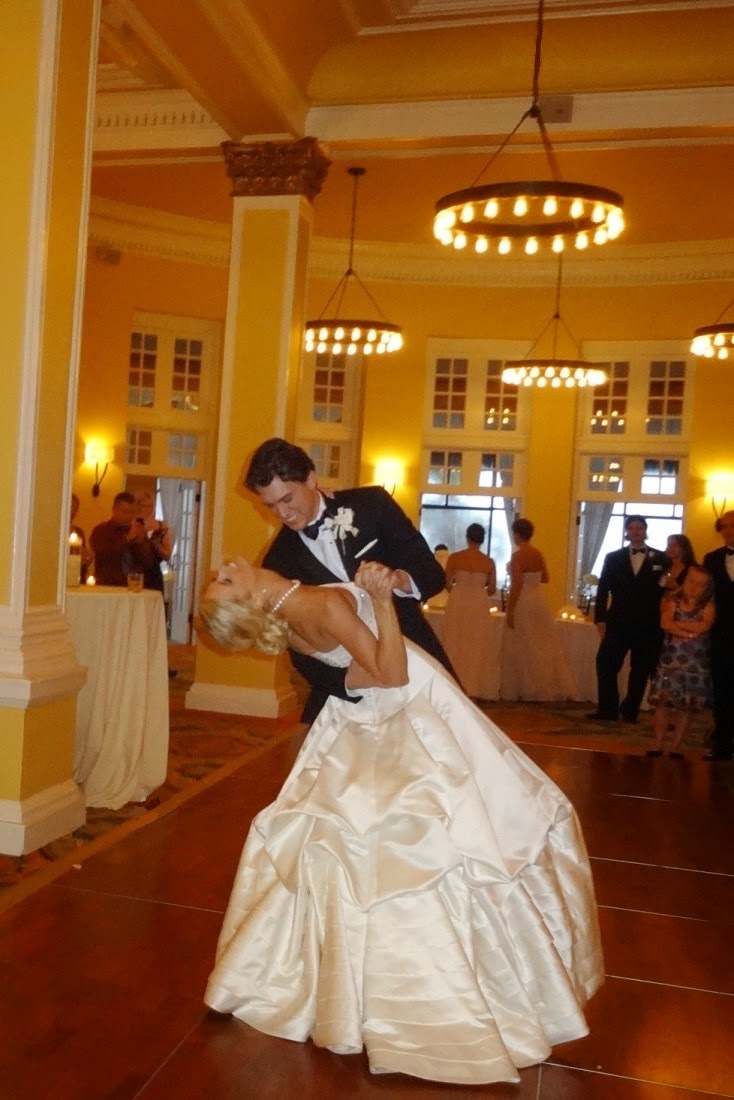 After dinner, we moved onto the Toasts and Cake Cutting.  Morgan’s elegant white cake had three smooth tiers, each separated by a ring of white hydrangeas.  Hydrangeas also made up the topper.  Bryan’s ‘cake’ was a hit, as it was a table full of pecan pies!  You know how people love good pecan pie, and they got some at this wedding.  The Father/Daughter Dance and Mother/Son Dance came next, and then Bryan danced with his beautiful daughter before the dance floor was opened to all.

Since the couple went to Texas A&M, we finished the night with the Aggie War Hymn, before the guests each grabbed their A&M custom spirit towel favors.  The Newlyweds shared in the Last Dance dance, bid farewell to their guests and strolled off to their Honeymoon Suite as a married couple.  Congratulations Bryan and Morgan!