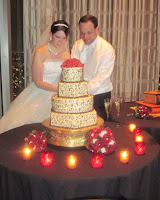 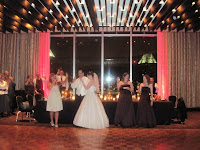 The colors for this fall/winter wedding were ruby red, chocolate brown and champagne. They looked so elegant and were perfect for the cool weather. And they looked so pretty in the ballroom of the Petroleum Club. The tables were topped with dark red rose centerpieces with candles scattered around. The head table had no flowers, just candles galore. It was so pretty! To add to the look we had two red uplights highlighting the head table and that really made the room look gorgeous!

Other details I noticed were the photos and the favors. Normally you see a few photos on the sign in table, but this couple did it differently. They had about 25 photos of them at all ages, and they were displayed on two long tables covered in candles. It looked so pretty and actually added an accent to the room. There were custom made magnets at each place setting with the Newlywed’s picture on a black scroll background. They even matched the design on the Bride’s cake.

Virginia looked so beautiful in her white strapless gown with full, tulle-topped skirt. The bodice had beading and embellishments and featured a tulle band at the top, and the skirt had a bit of beading to match. With her up-do and thin headband tiara, she looked so elegant. Virginia’s bouquet had dark red roses with white rose accents. The Bridesmaids wore brown floor length dresses and carried dark red bouquets with white and brown ribbon accents. Jason looked handsome in his tux with white vest and tie. His Groomsmen wore tuxes to match, with brown vests and dark red boutonnieres. Jason had two women standing up on his side, which is becoming more common, and they wore taupe cocktail length dresses that matched the wedding colors, with dark red rose corsages. It all came together nicely!

After dinner, the dancing started out with the Grand March (see post below to learn about it). That lead into the First Dance and Father/Daughter/Mother/Son dance, and party time began! This was another great crowd that loved to dance and have fun. They danced to everything from Country to Polka to Hip Hop to everything in between.

After a bit of dancing, it was time for the cake cutting. The Bride’s cake had four white stacked tiers with chocolate scrolls on each. It was topped by red roses. Jason’s cake was two stacked books and they almost looked real! The top one was Atlas Shrugged (I admit it, I never did make it through that whole book, kudos to anyone who did!) and the bottom one said Quantum Physics. That cake was awesome! The toasts followed, and the Anniversary Dance started the dancing again. The longest married couple was married 51 years, and after they shared some words of advice to the Newlyweds, it was back to the party.

Following the bouquet and garter and more dancing fun (including overtime, this crowd didn’t want to stop!) it was finally time for Virginia and Jason to make their exit. They ran through a shower of rose petals and ringing bells, and headed off to their new life together. Congratulations Jason and Virginia!
Posted by Wendy No comments:

What is the Grand March?

The Grand March is not the introduction of the Bridal Party into the room. That’s the entrance. The Grand March is a tradition in Czech, Polish, German, and other cultures. There is a particular Polka song played and a couple leads the guests through the dance. They dancers are in two lines, one of men and one of women, and they are lead around the room, sometimes crossing each other, sometimes coming alongside each other, and sometimes on opposite sides of the room. At one point, the two lines end up next to each other, making an arch for the following people to walk through. It’s a really cool thing to watch! At the end of the Grand March, all the guests are in circles on the dance floor and the Bride and Groom are inside the innermost circle. Then, they begin their first dance. The Grand March is really fun to watch or participate in!
Posted by Wendy No comments:

Have a safe and Happy Thanksgiving!
Posted by Wendy No comments: 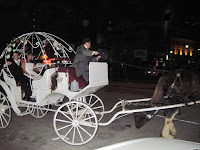 This reception took place at the Historic Magnolia Ballroom downtown, which is so pretty! And, the Bride and Groom chose colors that matched the room beautifully. The colors of the day were light sage green and gold, which made the reception even prettier. Celeste wore a gorgeous, elegant gown with a lace overlay and a light taupe sash, and she carried flowers in assorted fall colors such as yellow, orange, and dark red. The Bridesmaids wore strapless cocktail length gowns of sage green with lighter sage green sashes, and they carried bouquets of yellow flowers. The little Flower Girls were adorable in their matching dresses (and they were on the dance floor all night long!) The Groomsmen matched the wedding colors by wearing sage ties and yellow boutonnieres.

The tables had gold floor length tablecloths topped with floral centerpieces surrounded by candles. There were even gold chivari chairs to pull it all together. The really cool thing was the favors at each place setting: individually wrapped candy apples, with a personalized ribbon tied on the stick. They were so cool!

After mariachis, dinner, and the special dances, it was time for dancing to begin. This crowd was fun: dancing from the very first song! They liked everything from pop to country to oldies to hip hop to Motown to Spanish. At one point, a guy did the Snake on the dance floor, which is always a big hit. What a great crowd!

The Bride’s white three tiered cake was so pretty, with white scroll designs and sage colored fondant ‘ribbons’ at the bottom of each tier. Jeff’s cake let us all know his hobby: it was a pair of golf shoes. It was so well done that from a distance, you would think they were real (but very, very big!). They did the cake feeding nicely, no smashed cake here. After a very sweet toast and a few words from Jeff, it was back to dancing time.

After the bouquet toss (no garter for this couple), and more dancing, it was time for the evening to end. Celeste and Jeff ran through a shower of bubbles and headed off to their new life together, in a horse drawn carriage. Congratulations to the Newlyweds!
Posted by Wendy No comments: