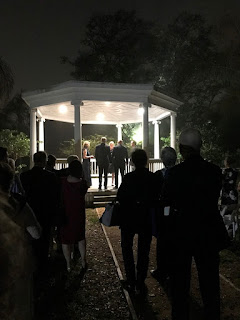 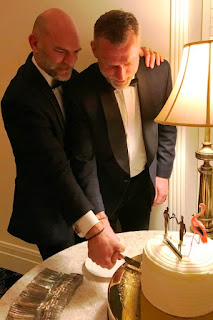 We had such a great time working with this wonderful couple.  It was so sweet being around them, seeing how much they loved each other.  Their wedding day started with a cocktail hour before the guests were ushered outside for the gazebo ceremony.  For the ceremony processional, Scott and Mike walked down the aisle together, preceded by their dog Beau.  Beau even wore a cute little tux!  Mike and Scott looked so handsome in their matching tuxedos.  The jackets had a subtle navy plaid design and they looked great with their white shirts and bow ties.  During the ceremony, the couple did a hand fasting in addition to their vows.  In lieu of traditional seating, Mike and Scott had one row of chairs making up the front row and the rest of the guests gathered around the gazebo.

With the wedding color of navy, the reception ballroom was decorated beautifully.  The tables had floor-length navy satin cloths topped by gold chargers.  The centerpieces were either low vases with blue hydrangeas and orange roses, or tall vases with the same flowers in larger arrangements.  It was all very elegant.

The newlyweds decided to do their cake cutting a bit differently.  Rather than announce it, they just casually went over to their cake and cut it.  When they removed a slice, we saw that it was made up of tiers in rainbow colors = so pretty!  The cake topper consisted of a silhouette of two men holding a heart, accented with two pink flamingos.  (I’d love to know the story behind the flamingos!)  For favors, Scott and Mike went table to table, personally giving each guest a gift bag full of items.  How awesome!

After the toasts and special dances, the dance floor was opened up to everyone.  It’s not often that the first dance song packs the dance floor, but it did with this crowd!  They were out there having fun from the first song to the last.   At one point, during the song “Shout,” Mike was laying on the floor, waving his arms and legs in the air.  It was hilarious!  When the night came to a close, the newlyweds made sure to say farewell to all of their guests before heading off as a newlywed couple.  Congratulations Scott and Mike!